The Theory of a Good Brunch

R and I have been watching a particular rip-off of F.R.I.E.N.D.S. Doesn't hold a candle, by the way. Anyway, brunch is a rather popular concept on it. So R and I thought, "why not??"
Now I had heard about this brunch place in E-Square Complex called Not Just Jazz By The Bay. Apparently the "By The Bay" bit comes from the fact that it's in Mumbai too. It's essentially a brunch and buffet place. We went for the buffet. On calling ahead, I was told that the brunch buffet had soups, salads, a main course, dessert and a mocktail/beer. I was hyper excited about the mocktail bit, because what I feel about beer I don't think I should type on a food blog!
But as luck would have it, cocktails was not an option. It was either a soft drink or the previously mentioned golden beverage. Now soft drink had once made me see my meal in reverse, and suffice to say I don't have that anymore. So beer it was, happily lashed up by R, who was more than happy to swipe two huge mugs! 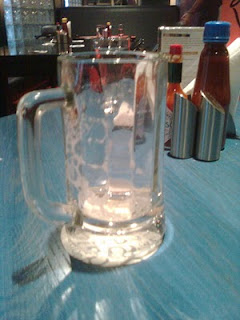 The first bit they got us was from the sandwich menu. We chose a Chicken Tikka sandwich and a Chef's special, which was essentially chicken, mayonnaise and mustard in a perfectly grilled sandwich (perfect: grilled through, buttery patches in the middle, no burnt edges). Munched on thoughtfully provided pita pieces and that beautifully silky yet grainy new "stylish" delight- hummus, butter (in those unopenable Amul butter packs) 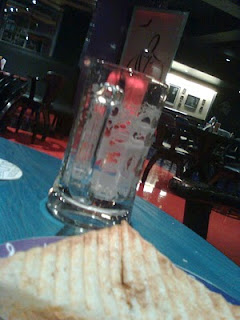 and bread rolls meanwhile. The sandwiches were beautifully done, even if they were really tiny (finished in two bites by me).
We ambushed the buffet spread thereafter. 4 non-vegetarian salads, 6 or 8 veg ones. The non-veg ones were standard by way of variety, the usual mix of mayo and chicken with bits of pineapple and stuff and others a pseudo-vinaigrette mix. Not bad really, just lacking in variety. The veg ones more than made up for it. Pasta salad (too doughy), potato salad, the usual sprouts, a Greek salad (feta cheese-tomato) that was actually very nice, a standard cucumber-tomato-onion-carrot idea and quite a few more. Dips like hummus, thousand island were kept close by to douse on pitas.
Now soups. Only two. Now thing is that I on a personal note do not like thick soups, otherwise the avocado-chicken soup I took was silky, and quite creamy. Would be much more appreciated by one who likes thick soups. There was a vegetarian version too.
At this point comes the crux of the meal, with the main course. Sadly, the meal went through a rather bad patch here. Only one fried rice (extremely standard), and two gravies. One was Orange chicken and the other mushroom manchurian or something like that. There's one thing, I must mention here that I don't like about Indianized Chinese. Spice up the taste all you want, put in as much bird's eye chilli as you want to ensure a permanent tattoo in your stomach, but quit battering and frying everything! The chicken? Large chunks in batter (beginning to come off) in a bright orange sauce. The mushroom? Battered out of their senses and deep fried in a non-descript brown gravy. The main course. Not impressed AT ALL.
The desserts kind of passed muster. There was chocolate mousse (well done, silky with no lumps), pineapple mousse (which unsurprisingly tasted like cough syrup, which is what artificial pineapple flavour tastes like), fruit salad, a black forest cake and a fruit gateau. Both R and I were expecting a lot more creativity and nouvelle in terms of desserts.
All in all, okay-okay. The price is affordable and VFM if and only if the quality of food goes up.
I'd give Not Just Jazz 2.5 chicken legs.
Keep your eyes on this space. Lots more coming up!!
Happy Eating Y'all!