Every city, no matter what the percentage of young population, has one nook that is beautifully vintage. It doesn't matter if the shutters are falling loose. It means the windows have opened and closed on a lifetime of winds. It doesn't matter if the stairwells are grimy. It means so many hands has grasped the stairwell for support, and each of them thank it by leaving a piece of themselves behind. As soon as you see a Chinese lantern on a balcony, wood painted over with an emerald green now chipping off, an old man looking out from there, clothes hanging to dry, bars on the window and you can see the side of a refrigerator from there covered with a lace doily, maybe a Merry Christmas sign still on the door even though it's March, you know you are seeing a home not a house. That's a sight that is not too common today, and really gets you thinking who we really are.
In Pune, this place would be MG Road. Home to the Parsi population, and by derivation home to lots of good food. Amongst all of them, which would hopefully show up in this blog before the semester runs out, is one very quaint and old time cafe called Marzorin. We've been in there once before on New Year's Eve 2009. This time, we went to the lovely terrace. There was seating inside, but the terrace afforded a sweet view of the road. Inside, there were the freezer cases of pastries, pastas, macarons etc, although it was a little ominously bare. An interesting part of the decor: there's an aquarium, which, although calms down many children, has frighteningly large fish. It's just.........very very creepy to see them.
The menu is expansive, even if many items are not available. For example, I wanted the Tofu Grilled Sandwich. It wasn't there. We ended up ordering a Brown Bread Grilled Sandwich, a guava juice, a green apple Chiller and a box of fudge. Service: very very slow. More than slow, I think the word appropriate here is laid back.
Now to the good part. The sandwich when it finally arrived was served with a sauce, named Zoom Sauce. But ohmygod the cheese was grilled to absolute perfection, the sandwiches were perfect (crisp but doesn't cut the inside of your mouth, buttery patch in the middle to soak your fingers). Small, but extremely good. So much so that R ran for another one! 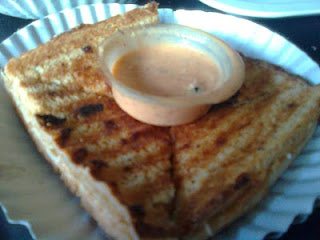 The guava juice, was in fact a smoothie. Nice and pulpy! The Chiller was green apple flavouring in a soda base. Extremely refreshing after a tiring day of walking around. Reminded me of the nimbu banta of Delhi. Very fizzy and nice! 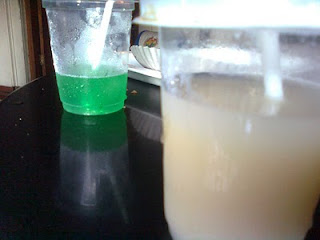 The fudge, even though it was in a slightly dusty (hence dicey) plastic box, was more a mousse and less a fudge. Because fudge by very nature is to be cut up in cubes unless it's fudge sauce. Still, studded with walnuts, it was nice. Not the best by any reach of imagination, but nice. Speaking of which I make the best fudge in the world!! R will testify! 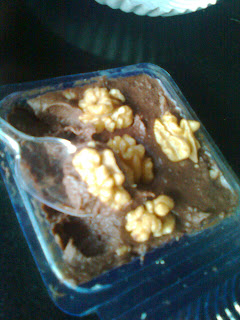 All in all, we liked Marzorin because of the quaint old world atmosphere, a relaxing break from a corporate driven life. 2.5 chicken legs this one gets!