A Homage to My Roots..and Oh! Calcutta

Spoiler Alert:
Very long post devoted to my culinary roots up ahead!
Also, none of the pictures below have been clicked by me. Attributions can be found at the end.
With that out of the way, now for the good stuff.
R needs to be introduced to Bengali food. He is a serious North Indian food snob, not without reason I agree. And I think it was time he came of age..uh, sort of. Let's take slow baby steps. Let's start with vegetables. Then boneless fish. Then the fish that perplexes seasoned Bengalis: Ilish. That is the Bengali's version of Arthur's sword, having conquered all the bones. Needless to say, I've got a long way to cover!
Bengali cuisine is in itself such an experience. I am Bengali and yet I am not tired of it, in spite of having spent my living years having it twice a day. Because you know, the cuisine does wonders with the most basic of elements. It's humanly impossible to get tired of it. A simple rui maach jhol (rohu, or salmon curry) can be made in, by MY count, at least 7-8 different way. Only grandmothers would know how many more ways there are! With onion paste sweetened when fried crisp. With the sharpest mustard paste, sweet coconut paste and a bite of slit green chillies. Stewed with fried potatoes, ridge gourd (jhinge) and pointed gourd (potol or parwal), the perfect soothing dish for summers, the soft seeds of the gourd popping in a burst of sweet juice. With tomatoes and coriander in a refreshing curry. Simmered with coriander-chilli-garlic paste, to create a heady aroma I can usually detect from two floors away. I can go on!
Prawns. Oh god those lovely things. My family demands two styles, that my mother (God Bless that sweet lady!) has to make simultaneously. Not that anyone complains. One is in a very light curry with potatoes and onions and cumin seeds, that makes a soupy mixture with rice that you mash the tender juicy potatoes with. Another which is for me, is a richer gravy of onion ginger paste, with potatoes. As I write, I realize that the ingredients are same, just two ways of preparing it makes such a massive difference in taste! These prawns, if any left (that's a recurring joke) finds itself into sandwiches as I've mentioned here.
Why I can never have caviar and sashimi is this: it's RAW (or at least processed). How do we have fish eggs or roe? Fried in balls in hot mustard oil with green chillies so that the flavour soaks, broken into ghee-rice and inhaled! That's why the idea of caviar and sushi is something that I abhor as a Bangali.
That's just the fish. Leave a true Bengali in the company with one banana tree, and see what she makes out of it. Eat the bananas. Make mocha-r chop (cutlets of banana flowers) and mocha-r torkari with kishmish (a subzi of banana flowers with diced potatoes, fat juicy raisins spiced brilliantly with garam masala and topped with Ghee just before serving) with the flowers. 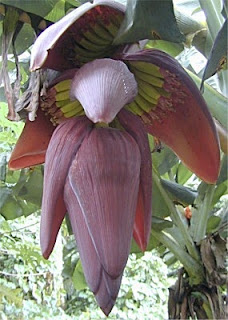 (The Banana Flower or mocha) 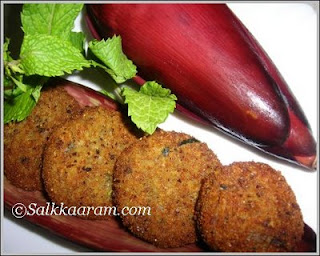 (Mocha-r Chop)
Thor-er torkari with the core of the trunk, which has a crunchy consistency of glass, with potatoes. Kanchkola bhaath, kanchkola being raw bananas, boiled and mashed with ghee, eaten mixed with hot rice. God I want to go home! For a Bengali there is no vegetable, and no part of a vegetable that cannot be cooked. Chhenchki, chochchori are the mixed vegetable dishes that form part of main course. Anything edible goes in it. Stems, leaves, roots, even entrails of the fish that does not make its way into a curry. It is the resourcefulness of the Bangali housewife, tested by the shukto  she makes. There are vegetables a non-Bangali (and many times even a Bangali) hasn't heard of. The tender leaves and stem of okra which we call kochu. Cooked with black seeds and garlic. I promise, ask my mother, I don't leave any rice for fish! Or poppy seeds (posto or khus) made into a paste and steamed with pure mustard oil, onions and chillies. I cannot describe the heaven that is. Or the mundane pumpkin diced and cooked with garlic. I maintain that non-Bangalis will enjoy the absolute variety of Bangali vegetarian dishes much more than fish. There's just so much!
I can keep writing about Bengali food, but that would require more memory that Blogger permits. Oh! Calcutta is one of those restaurants that puts up on an alter the already upper crust Bangali cuisine. A decor that brings back days of the Raj. A cuisine that is perfect for a bonedi Bangali biye bari (a wedding celebration of the aristocratic Bangali families). Menus that would bring a well muscled Bangali salivating for the dishes on offer. We went for the buffet (you know R and me) and literally, had a feast.
We were started on the Steamed Bhetki Fillet. It was the best piece of fish I have EVER eaten. It had the smell of mustard, but not the tear inducing bite that may well reduce the experience of someone who isn't used to it. Tender like butter, but holds it own on the fork. I could keep on having it! This was R's personal favourite. (The photo below was not taken by me, yet it absolutely captures what we had.) (Bhetki Paturi, or Steamed Bhetki)
..chased down with mutton kebabs (too spicy for me, R chows down mine as well as his), aloo badami (potatoes in a nutty sauce..a bit bland) and vegetable fritters..fried in batter. This is something we have nearly daily with our daal bhaath and I don't expect to pay through my nose for it!
We moved on to the buffet, where we started on chholar daal and phulko luchi. Chholar daal is split chana daal, cooked with aromatic garam masala, with chips of coconut and plump sweet raisins. Some areas of Bengal also puts mutton bits in it. Phulko luchi is puris or fried bread made out of maida or white flour, and deep fried, so that the air trapped makes it look like a fluffy white pillow, like this: 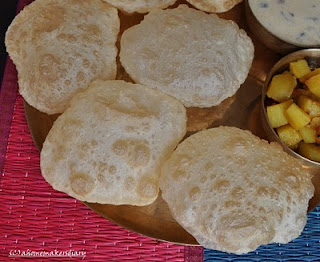 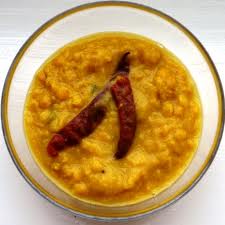 Chholar Daal)
We loved it, I because it was home food for me, and R because it somehow matched his taste. It's a fun feeling to sop up flowy daal with a quarter of a luchi, because the taste just pairs very well. It's a doughy sheet, with the crunchy film of fried dough on top, with bursts of cinnamon-bay leaf (tejpatta)-cardamom-clove flavoured daal soaking it through, the pulses themselves soft and pliable but not mushy.
We moved on  to the multiple chochchori and chhenchki (these two being dry and drier versions of a subzi, made with remains of vegetables. How a remain of a vegetable can taste so nice, only a Bangali would know!) and alur dom. The alur dom or Dum Aloo, was murderously red in my opinion, and hence didn't try it.
The Non-vegetarian selection had the Railway Biryani, that is to say Mutton Biryani. I didn't have it, because I was knee deep in daal then, but R said the mutton was very tender, and god quality, and the rice was done just so. Fish was available as shorshe rui,  that is salmon steaks in a curd-mustard sauce, flavoured with chillies. This was really quite nice. It had the tang of curd, the zing of mustard and the aroma of the chilli. What often happens is that the zing of mustard reduces grown men to tears and reduces the eating experience because you're too busy fanning your tongue. Bangali shorshe bata (mustard paste) is simple mustard seeds ground on a stone with water, and no sauce, no packed smooth grainless mustard sauce can replace the small bits of brown peels in the gravy. 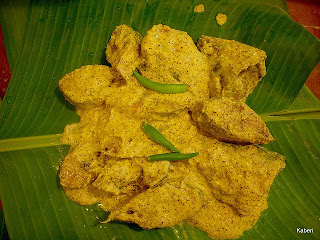 (Shorshe Maach)
There was prawns too, as kacha lanka chingri (Green chilli prawns). The quality of prawns was very good, crunchy yet cooked, firm yet soft. It was tail on, so one had to go through that very pleasurable treasure hunt of pulling at the tail gently yet firmly, toeing that line carefully so that the entire tail meat comes out. If it doesn't, one may well get to hear the choicest Bangali expletives (which there aren't many of). There was Lahsun Murgh, a version of Chicken in 40 Cloves of Garlic. Nice, nothing to write home about.
Interestingly, there was this thing called Plastic Chutney, which is at its simplest a chutney made of thinly sliced raw papayas, which gives the look of cellophane. This was something I had the pleasure of having last when I was 12. I veritably jumped on the table to grab at it, and was not disappointed. Oh! Calcutta also has a sweet system of serving chillies speared on a toothpick. I now see many places copying that.
The dessert platter was extensive. Raspberry Mousse in the tiny cups I've mentioned in my previous post, bread and butter pudding (undoubtedly as a vestige to the days of the Raj), ranga aloor sandesh (sweet cakes made from sweet potatoes), malpoa (mini dense pancakes in sugar syrup), sabudana payesh (pudding of tapioca pearls), etc. 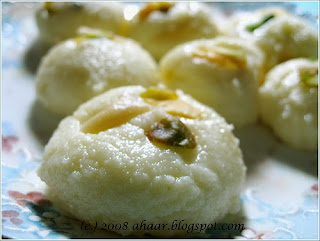 (The famous Sandesh)
All in all, frankly, the vegetarian options were as usual better than the non-vegetarian, because there is just so much more to try out. It gave me a taste of the home food I was missing, not because of the elaborate way of preparation, but because of the kind of foods available. The tastes I tasted. The smells I smelled. I give Oh! Calcutta 4 out of 5 chicken legs.
Bangalis, enjoy yourself, take some time out to regain the flavours our didima and thakuma had us taste from their hands when we were small. Non-bangalis, savour the million flavours of the east coast of our country!
Until next time!