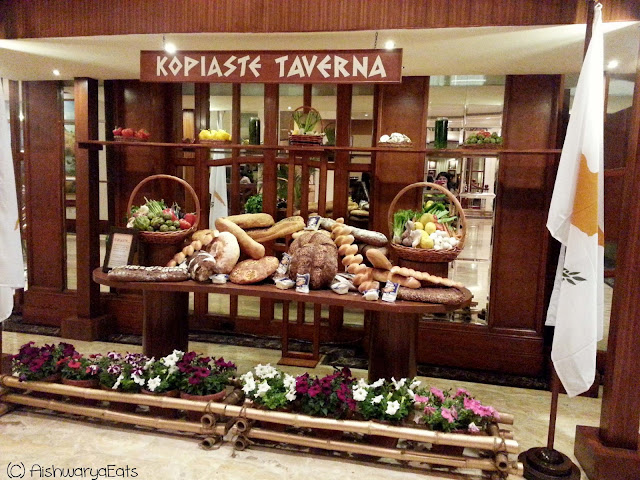 Cyprus brings up images and flavours of olives, halloumi, goat's cheese, artichokes, tomatoes and lemons. Having said that, I had no idea what to expect (and get excited about) when we were all invited to take part in a Cyprus Food Festival, organized by the Cyprus High Commission, New Delhi. I did a week's worth of research even!

Mukta, Tanya, Charis, Sid, Sangeeta and I arrived at Blooms, at Eros Hotel managed by Hilton to participate in what could, at that time be only described as a totally blind treasure hunt. We started the evening with some tart olives, munchies in one of the best yoghurt-and-olive-oil dips I've ever had. Still at the munchy stage, we were served Tomato and Feta Mousse on Multigrain, Sliced Hiromeri on White Bread, Grilled Halloumi on Pita and Fig Filled Chicken Breast Roulade on Poppy Seed Bread by the wait staff dressed in traditional Cypriot attire. The breads, where sometimes was soggy, at others was really crackly. The cherry on this already loaded cake was the Lentil and Cuttlefish Shot. The dressing was lemon and onions and tomatoes, and the cuttlefish I knew was superbly presented, although at this point, the fish smell attacked me, and I could not play that shot. 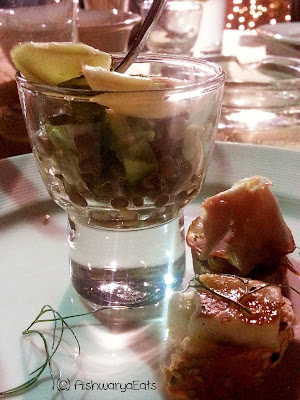 At this point, I should tell you, I was shamelessly peeking at the domes and salvers on the other side of our area, not being able to wait a single more second.

As soon as it did, we took the longest happiest table with the good lighting and started loading our plates. First up we had the salads. The display was stunning. There was Lountza, that's dried and smoked pork, Hiromeri, smoked Pork Leg matured in wine, and Pickled Octopus. The cured meats were salty and just the right amount of yum. Also there was the Smoked Chicken with Black Eyed Beans, Rocca Salad with Pastilash, Marinated black olives, a bright ruby red Beetroot Salad, a rather flat Potato salad and the Tomato salad with Halloumi. This was my first time tasting Halloumi, and I don't know if it's supposed to taste like that, but the thing was as tough as a piece of carpet. 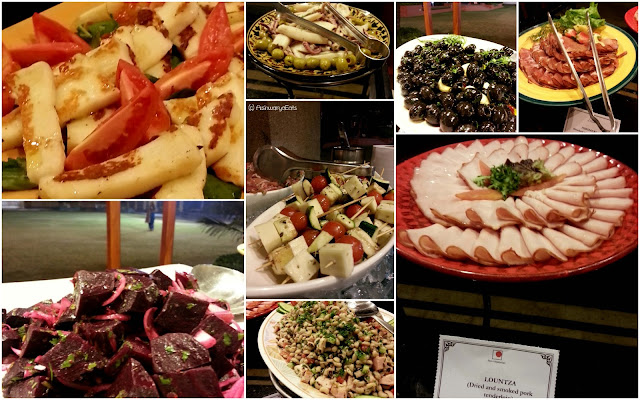 There were live counters for Keftedes, that's deep fried koftas, and Souvlas, that's the grilled chicken, pork, lamb and prawns. From what I hear, the chicken ones were quite good, the pork and lamb ones were okay. The prawns however were explosive. They were fresh, soft, juicy but retaining that crunch of the best cooked seafood. And that sweetness of the olive oil and the herbs were so good I actually had about 8 of it. Hehe. 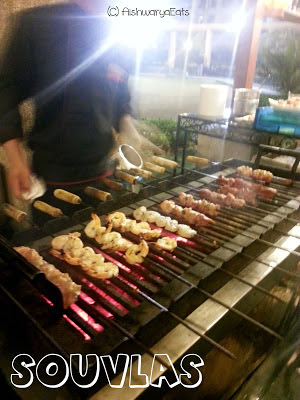 On to the main courses, there was Kotopoulo Me Fasolati, chicken cooked with green beans, Kathisto, octopus and onion stewed in white wine, Lamb Giouvetsi, a Cypriot Pasta dish, Pork Afelia, pork braised in red wine with crushed coriander seeds. I have to say though, while I understand some dishes may agree with us in terms of taste, there are some standards that have got to be followed. The Pork was rubber tough. That is something we didn't expect of such an establishment. Maybe, and I hope, it was just this batch. The Kathisto was overpowered with the onions. It took me a good deal of searching to locate some octopus in it, not having realized it was there at all.

The desserts were extensive and very Indian. Lots of halwa like elements on offer, I took up on the White Chocolate Bombe, Fresh Fruit Tart, Soutzoukos (almonds wrapped in grape fruit leather), Galaktobourekko (semolina custard encased in phyllo), Fresh Strawberry Cake, Mahalepi (Cypriot pudding in rose syrup) and a caramel pastry, apart from Tiramisu and fresh fruits and many Indian desserts. The Bombe was silky, sweet and a treat to the senses. The Soutzoukos was interesting, like a sausage and nice and chewy. Kids I feel would quite like this. The Caramel pastry was silken, almost like a caramel foam. The Starwberry cake was very well made, soft layers of angel food cake layered with fresh cream and crusted with toasted almonds topped with fresh tart strawberries. I loved the desserts! 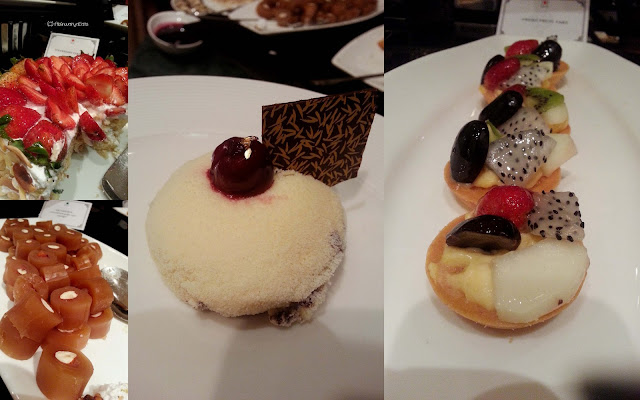 All in all, the salads were fresh, could do with a little more effort, the main courses are definitely worth a shot, but have to be revamped and the desserts were a treat! It's on till 24th February, go catch it if you would like to!

Until the next time!