Simply 5 experiences and just 4 months later, I'm feeling incredibly lucky to have chanced upon the Delhi Bloggers' Table at a wine tasting, about 6 odd months ago. And feeling luckier, that I was included in this fold of beautiful people, beautiful tales of food, beautiful flavours of food, brand new experiences and so much inspiration.

It is definitely much much more fun to eat (or hog) with friends than alone. Past Saturday, at the buffet of Mosaic, Crowne Plaza, Rohini, we had a Blogger's Table with Ruchira, Sushmita and Charis. I am already so smitten with their blogs. I mean they're hosting giveaways for 100th posts and the like! I am most literally at a quarter of that right now. I have never really gotten the chance to tell them, and the other members of the table (whom you would have met at Pan Asian, Espresso Grill, Oasis and the Cypriot Festival), how in awe I am of them. I look up to these guys for a lot of inspiration, and am never turned back! 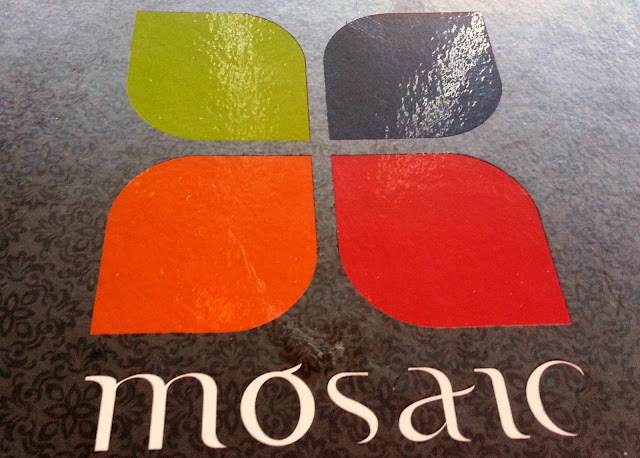 Okay now back to Mosaic. While it is in a galaxy far, far away from where the four of us stay, on hindsight it is so worth it! High ceilings, glass decorations, fresh fruits, colourful jars of golguppa paani, and the entrance to the restaurant flanked by a display of some desserts which has the capability to make anyone gain kilos on sight alone. But like I said, worth it! We had this beautiful ruby red Apple Celery Beetroot Juice that would come in handy later for refreshment purposes! 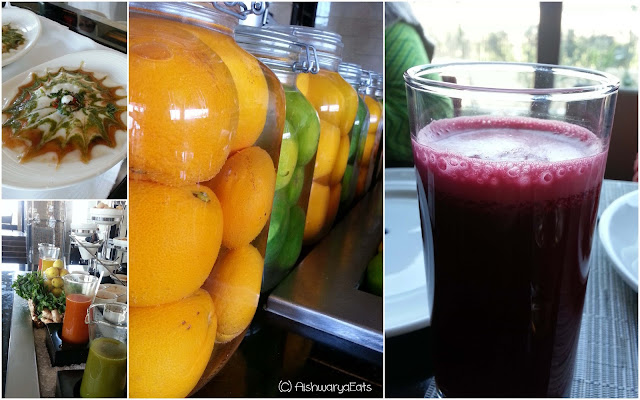 To begin with, there was chaat- bhalla papdis and golguppas with Mint, khatta meetha, Pineapple and Watermelon infusions. Surprised? The salad and the tapas bar made my jaw drop to the floor. My camera couldn't even capture the entire spread. So I decided to take it all on my plate and explain it to you. I need an excuse! 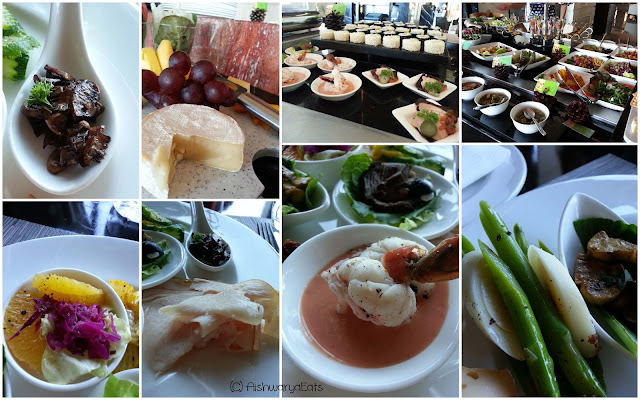 The Asparagus with Palm Hearts was tangy, lemony and you could tell on sight, the stars of this salad was fresh as fresh could be. The Marinated Zucchini with Prunes had the taste of lemon juice and good olive oil, and the zucchini was soft yet had body to them. I could have gone on with this one. The Nutty Beetroot salad was bright pink and promised the name. The Achari Mushroom salad, served in a soup spoon, like a few others could have come out from Mom's bottle at home. There was also Prawn Cocktail, truly well made since Prawns have a tendency to become a Non-Dust Eraser when boiled or steamed. The Roasted Tenderloin Salad was meaty without the smell of beef. There was also a delightful little bowl of Chinese cabbage and salad greens with segments of orange that is the most refreshing thing I've had.

There were cold cuts of Smoked Salmon and Turkey. The turkey was fabulous. I stayed off the sushi station! The Tapas selection had Water Chestnuts with Beets, Roasted Peppers Confit, Raspberry with Salsa and Mushrooms in a Balsamic Reduction. I had two, the mushrooms and water chestnuts. Both were beautiful, with brilliant play on textures and flavours. There were Edam Balls, Emmenthal and Camembert Cheese. The Camembert was so creamy I could buy a crate and eat it every day. But then my fingers would be too thick to type. There was some pretty fresh crusty bread and tiny little platters of flavoured butters. 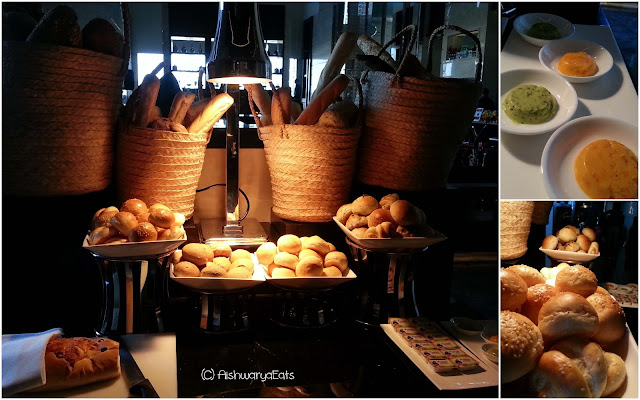 We were served our choice of Pastas next. I chose a White sauce based Penne, with Zucchini and Peppers. I found it to be light and flavourful, contrary to what was being told to me by those who had taken Tomato based sauces. Apparently it was too ketchup-y. The white sauce left a layer on my palate of the cheese, I don't know whether it should, but I liked it. 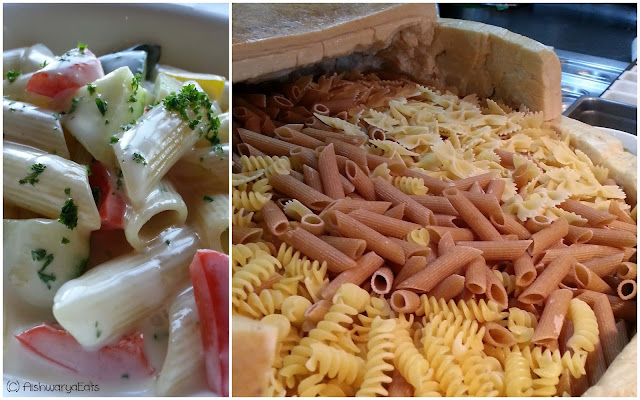 We also had the Grills. There was Tenderloin, Chicken, fish and lamb served on little satay sticks. The chicken was a little tough, the lamb was absolutely creamy, the tenderloin was surprisingly moist and juicy and the fish was flaky and soft. Well made, really well made. The dumplings however were like very normal momos. 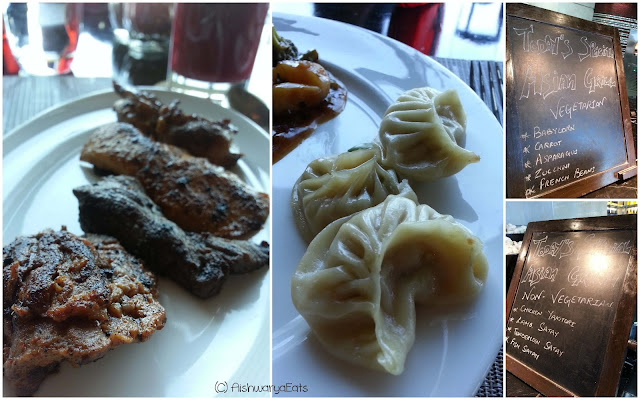 We skipped the Minestrone and Chicken Sweet Corn Soups to the main courses. I loaded on everything there. There was Symphony of Seafood, chunks of pink salmon with curls of butterflied Tiger Prawns, served with wedges of Tomato and lemon. The gravy was really flavourful, but the fish somehow missed the train of flavour. 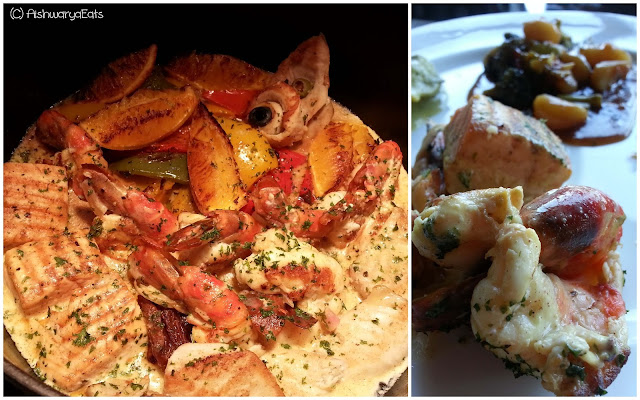 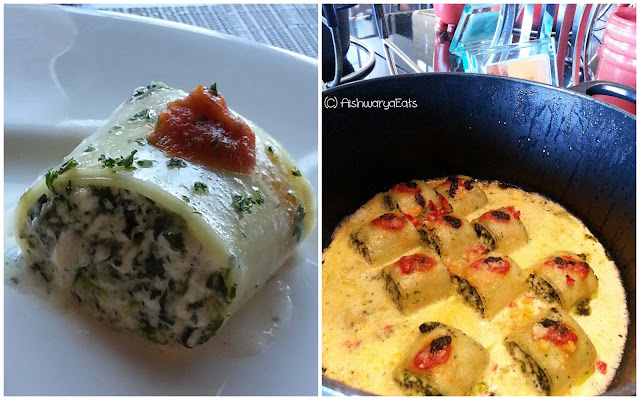 There was Potato Dauphinoise in a tomato basil sauce. Even though the stacked potatoes felt a little starchy, the sauce totally made it into something that would come out of an Italian Mama's kitchen. First rate stuff this was. 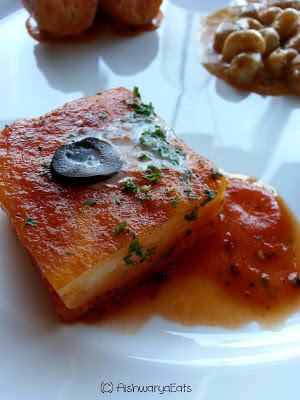 There was a Khajoor Malai Kofta that felt smoother than smooth, but the smooth prize should go to the Kajoo Matar Makhana. Dots of green in a cream based makhhni gravy with the toasty flavour of makhana and cashews, it was something I must learn to make. In the entire spread, this was the highest point. Luxurious, indulgent and so smooth. 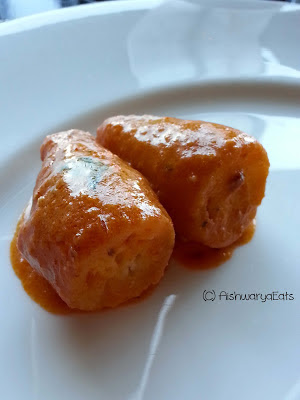 In the two Oriental dishes, the Thai Green Curry failed to excite. However, even though the Asparagus Broccoli and Water Chestnuts with Soya and Garlic had the same brown gravy of many many restaurants, their play on textures and flavours was worth a try. The nutty sweetness of the chestnuts, the green taste of the asparagus and broccoli worked really well and it went well, well okay with the Chilli Garlic Noodles. The rest of the mains was made up of Soya Dalchini Pulao, Dum Ki Arbi, Murgh Handi, Bhuna Gosht, Stir Fried Chicken and Palak Paneer. 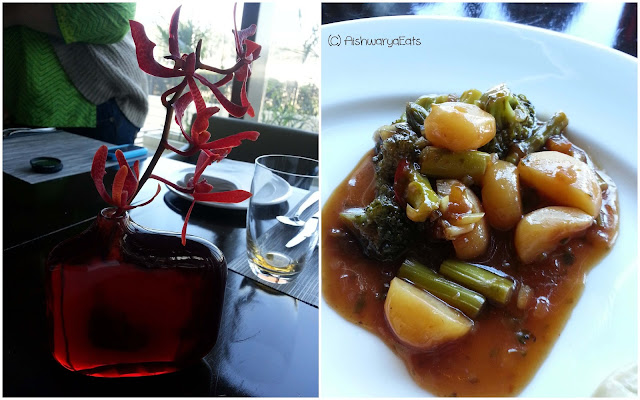 Dessert followed next, with us rolling to the Dessert counter to get us some Strawberry Gateaux, Chocolate Mud cake, Kiwi Mousse cake, Orange Mousse, Kiwi Pastry, Omali (like a kheer), Kesar Bati and Shrikhand. I think the staff confused Strawberry Souffle with Mousse, because what we had was a creamy artificially flavoured dessert, nice, but not the fall-with-a-breath Souffle. The Berry Baked Yoghurt was interesting. The flavours was very Greek, but the textures were very off. The Creme Brulee wasn't touched after a bite by Sushmita. The Dark Chocolate Profiteroles looked really very good, and I think tasted the same. Alas I couldn't have it because I was far beyond my capacity! 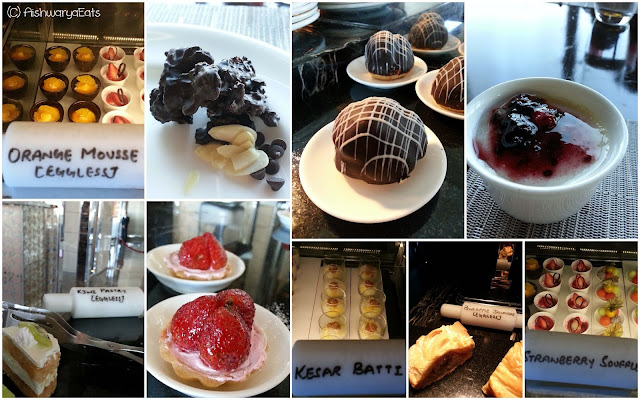 There was a Chocolate Fountain though, with a variety of dipping options. I made some space in my stomach because no, no one says no to a Chocolate Fountain. And I followed it up with some balled fruits. Because you know, I can. While other had a cup of Green Tea, I hardly had any space left. You know, I was full, but wasn't feeling weighed down as one does when one had eaten too much. Points for that! 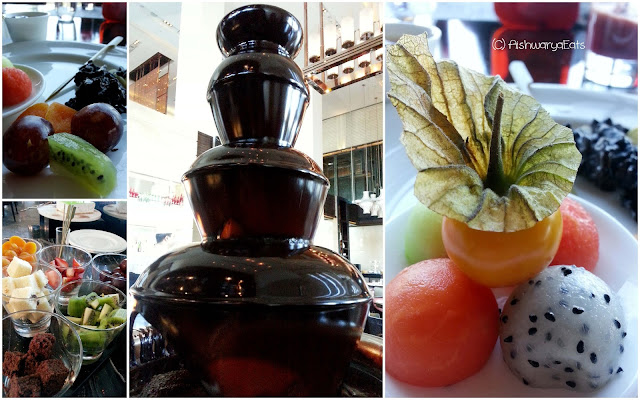 Overall, The buffet at Crowne Plaza Rohini is a must visit. The Salads and Tapas were fresh and very well thought out and crafted, the mains were indulgent and extremely well made. The desserts though, need a little work. At a price of Rs. 1149 (plus taxes) for a lunch buffet per person, you will be spoiled for choice. Interestingly, about 70% of the menu is vegetarian, based on their guest profiling.

You won't regret going out of your way to Mosaic. Until the next time!