I'm a Bengali. So I schedule my vegetarianism to kick in on the 4th of Never Ever Ever.

I respect vegetarianism and the vegan lifestyle. It takes a lot of strength to make that kind of a choice. However, that's not me. I will appreciate a pork chop over grilled veggies any day. I will choose scallops over tofu always. I will choose a rather unhealthy chicken roll over a honey chilli potato at CR Park, as I will today itself.

However, once in a blue moon, there comes an experience that changes the way you have seen vegetarian food, or even food for that matter. An all vegetarian dinner isn't something I expected as part of the Blogger's Table, but there it was. The entire Bloggers' Table got together at The Piano Man Art Cafe at Basant Lok for an evening none of us are likely to forget! Everyone was there, Sangeeta, Himanshu, Parul, Sushmita, Sid, Ruchira, Charis, Rekha, Mukta, Rituparna and myself!

A sweet little cafe, low lit, and with hand-painted beams, the cafe is a delight to be at. I wonder what heaven it turns in the winters though, with a large window that promises sunshine flooding the interiors. The best part though, is that beautiful piano in the centre of the cafe. Which the owner Arjun himself plays, as he did the evening we were there. There was a cellist who played so beautifully, it took me quite a few glances to make sure it wasn't a recording! 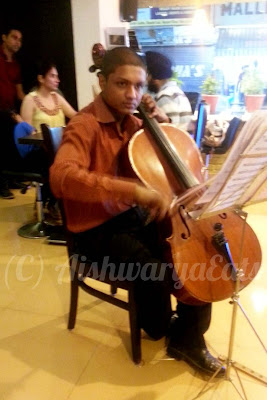 Okay food! Firstly we had little menus for us, and you know how much I adore that. We started with beverages in little jam jars (half portions), Mojitos, Chocolate Hazelnut shakes, and Paan Smoothies. No I did not mistype it. A Paan Smoothie, which I took. Usually, Paan flavoured anything invariably has the flavour of zarda and betel nuts in it. Not this, this was a milk base, with meetha paan  blended into it, bits of paan and loads of cold gulkand. All the goodness of a paan without the weird taste. Needless to say, this was the best and most inventive smoothie I've had in my life. 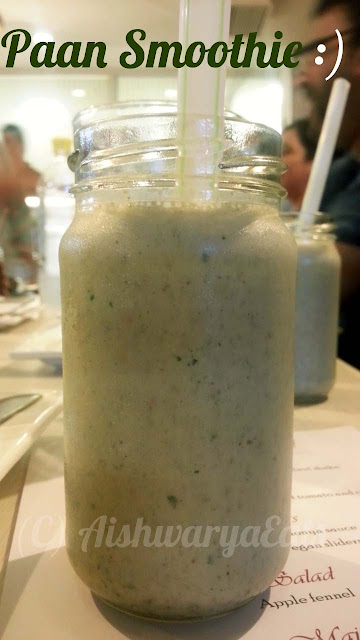 We chased that down with a quarter portion, a teacup full of Pumpkin and Peanut Butter Soup. It tasted like fudge, that gentleness saltiness of peanut butter mixed with the flavour of sweet pumpkins, what autumn looks like on Pinterest. Served with slices of fresh garlic bread, I can't help but wonder how divine that would taste like on a cold winter day, dunking each slice of that bread into that smooth soup. Again, super-inventive! 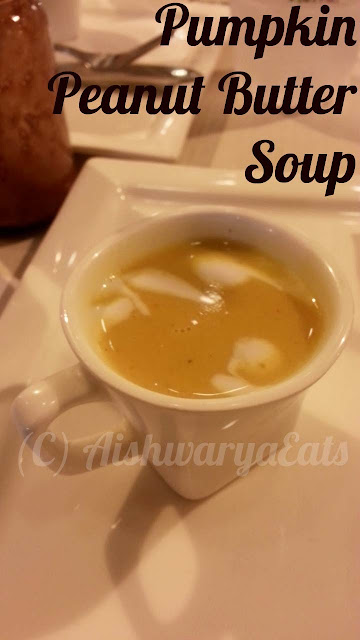 We followed that up with an Apple and Fennel Salad. Slices of tart green apples, salad leaves, and slices of fennel in a herby citrusy dressing. There's something about the sourness of citrus that goes with herbs and elevates it. especially in a summer salad. The others at my table had their reservations, but I found it lovely. Every bite was a burst of refreshing summery flavours! 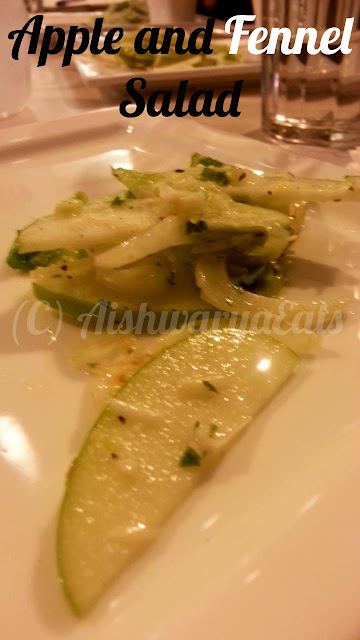 We were next served Stuffed Mushrooms in Nonya Sauce. Large mushrooms, batter-fried (surprisingly not even a little bit oily), smothered in a sweet chilli sauce. Stuffed with what you ask? Cheese! Ooey gooey herby cheese! It was very very good, with most of us taking second helpings! Though to be frank, I didn't quite understand the difference between Nonya and the honey chilli sauce used otherwise in Chinjabi food. 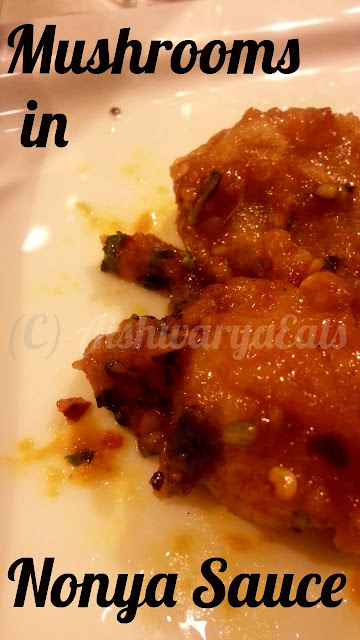 Up next: Vegan Sliders. The patties were made of Brown Rice and walnuts. While I'll give the innovation, it was very dry. And even though it was really tasty, the dryness took over too much. 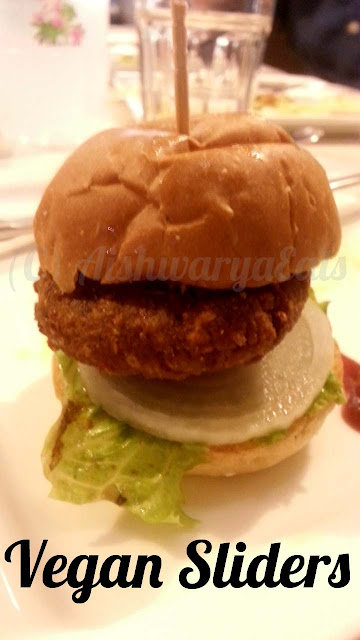 The Mezze platter was very normal, although the hummus, if house-made, was fabulous! 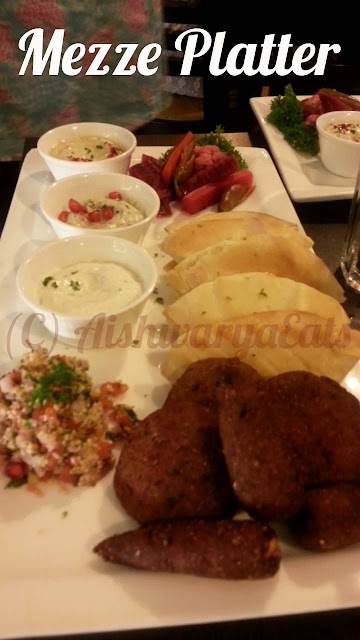 The mains were really very good. We started with the Potato Dauphinoise. While it looked not much different from a gratin with creamy potatoes and a crusty brown top, it was heavenly. I loved it, because it's not so tough to make, and was really simple food. For some, it may need a touch of seasoning. I'm wondering how yummy it would be paired with chicken. 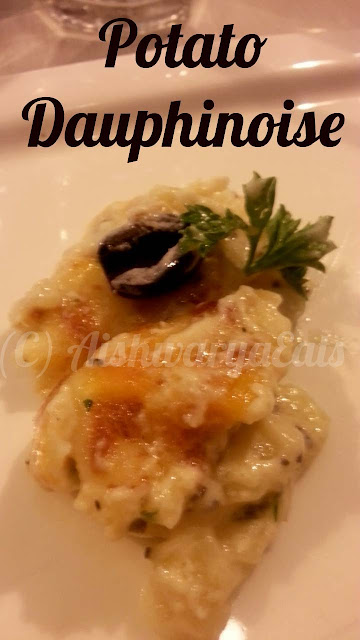 We followed it up with the Ratatouille. It was tomatoey, and so many fresh vegetables! This wasn't a fancy dish, this was homestyle stuff. I kept imagining the adorable rat in the hat, and nearly licked off the plate. There was also a pretty normal, yet quite cheesy Wild Mushroom Risotto. Might need seasoning for this one too. 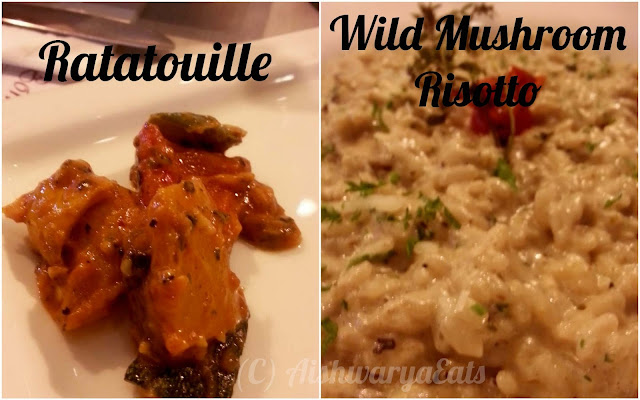 We were served Brown Rice with maple Glazed Corn Cakes and Miso-Tahini Dressing. The brown rice was soft, and sweet, because it was nestled close to the corn cakes that were in a galaxy of their own. These tender cakes were slathered in a soy-sauce coloured Maple Syrup reduction, that had bits of fresh, intensely flavoured lemongrass! That made the corn cakes taste unbelievably fresh and woke us up on what was soon becoming a food coma. Best part, the sauce rubbed off on the rice and made it taste sweet, lemongrassy and awesome. I felt the Miso-Tahini dressing was not required. I didn't want this one to end, but the desserts were coming up, and as you know, I have a soft spot for desserts! 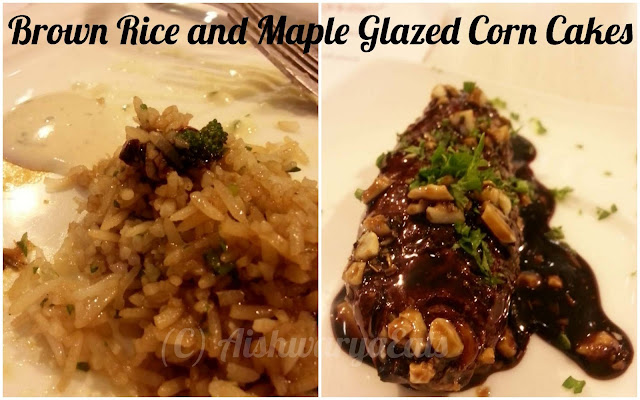 We celebrated Charis and Sushmita's birthday with a Crack Pie. Why that lovely gooey dessert is called a crack pie, I now know. I couldn't keep off it! The filling was milky caramelly and the crust was crumbly and sweet. Though I must say, the filling smelled a little too eggy. Nevertheless, the pie was yum! We followed it up with the Tiramisu. Now, why I like Tiramisu is the sweet strong coffee taste with the creamy cool mascarpone and the soft soaked sponge. This Tiramisu hit the wrong spot was on two counts. One, the coffee was WAY too strong and bitter. It made the entire dessert bitter. Secondly, there was a layer apart from the sponge, that felt like crushed Oreos to me. Super sugary and dense. Wish the tiramisu could have been a bit better. 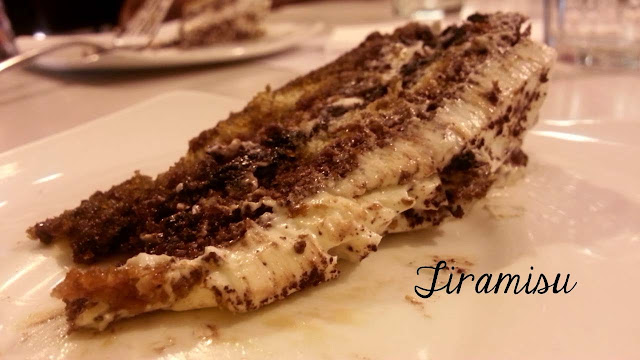 The finishing touch, though, took the tart. Tart? Yes. A luscious Sea Salt Caramel Chocolate Tart. Thank heavens for the Aztecs, who discovered chocolate! A buttery pie shell, a thick layer of soft caramel oozing out, and a generous layer of rich bittersweet chocolate ganache, topped with a few sea salt crystals. I wish I had 8 more mouths to eat it with. My idea of sweet coma. And I loved it. 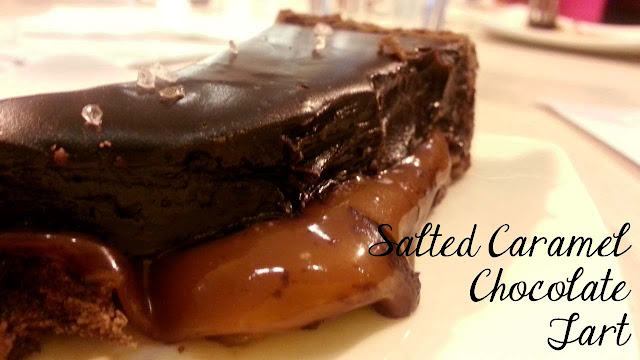 So that was that! I did not have any breathing space left, even for the green tea that went around. I have to say, The Piano Man is a MUST VISIT. Loved the ambience, loved the food. What more does a girl want! Oh and when you go, the Paan Smoothie is a must try! 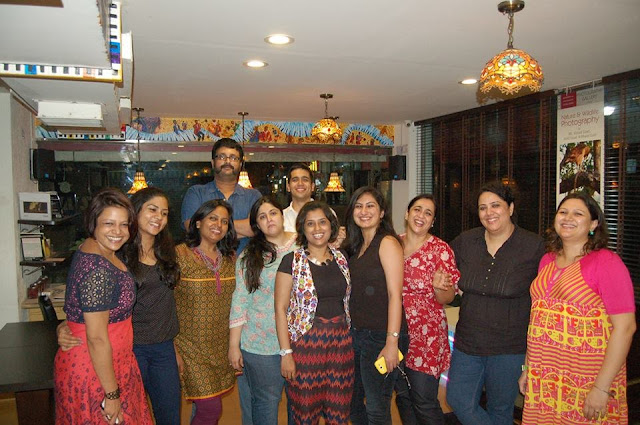 'Til the next time!