Yes I know I have fallen off the face of the blogging world. Hold on. ........and I'm back!
Now that R's and my journey in Pune is nearly over, and we still have some space left in our collective stomachs, we have decided to let out tummies burst with all the food we haven't yet had. Barbeque Nation was one such place.
Now make no mistake, R and I are by no means the biggest stomachs in our circle. There are at the last count at least two others. You'll be happy to know though, that I'm the only girl in there! Here's to me (and my tummy)! Anyway, I digress. They had spoken at length about Barbeque Nation, and not a bit of it was unsavoury. In fact, what one of them said was pure statistics.."9 starters, 16 main courses, 7 desserts in the buffet". Like you, I simply "did the math"!
So off on a Saturday we went. A little out of the way it is, but what good thing isn't? It's on the ground floor of a mall, which didn't bode too well from the outside. Once inside, it was much much better. A word about the decor. I've heard of mixed signals before, but this put my radar out of business! There was wood, there was a little bit of blackened metal (which with wood looks very rustic), there was soft yellow light. There were paintings. Then there was glass. And in the strangest of twists, there was a hand painting of "Finding Nemo" on the glass, which was the front for the now-you-see-it-now-you-don't kitchen. No, don't ask. Yes, why indeed, answer by all means!
Okay now the good stuff. The food. Our table was for two, with a removable tile in the centre, and small stands for sauces on the side. In a minute, the staff removed the tile, and put a live grill in its place. Yes, with the red coals and stuff. Here, this is a picture: 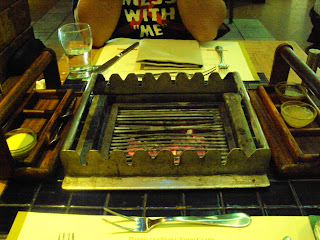 (The live grill with the marinades)
For drinks there was an option of beer (R had the smile of a happy cat on him) and mocktails (my turn). I took a lychee thingy, that inexplicably was blue. I admit it was terrific.
There was a place setting of all the delights about to befall us, when the servers brought us skewer after skewer of heavenly delights like: 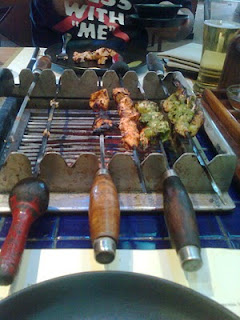 (From L-R, you can see the chicken mushquila, fish ajwaini and parsley prawns above..and the beer)
The "Tangri" meaning leg (of chicken), was in a gentle marinade, that gave a solid kick when roasted. The leg was massive, and very very tender, but beautifully well done. The prawns on the other hand, were heavenly. It was a coriander leaf marinade (I don't buy the "parsley" bit) but will you hear me complain. Oh no no. Crunchy, yet cooked through and through. Tender, yet retaining that fresh body to it. Four to a skewer. The stands beside us was full of sauces and basting liquids, which we could brush on the skewered food, and grill away to high heavens. The best part? It was Unlimited!! The servers just kept on refilling. Not a tweet of complaint from us! 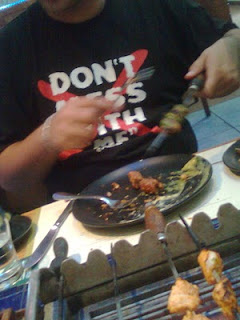 (R happily chowing down the umpteenth helping of Parsley Prawns)
Now main course. I don't know why, but every buffet I've been to, including our past experience, has disappointed sorely in the main course. The menu here was thus:
See it's a simple thing. I understand that a buffet has a free-for-all situation, but putting Chinese (ahem) and Indian in the same buffet is a no-no. How would you like it if your Fish in Hunan sauce was rubbing shoulders with Dal-e-dum? Nope nah-uh. Barbeque Nation too screwed up its main course BIG time.
The desserts were rather nice: Angoori Gulab Jamun (tiny marble sized perfectly golden brown soft gulab jamuns), Ice Cream with an option of fudge, pineapple or strawberry sauce (enough to send any human over the edge), Walnut Chocolate brownie (nice, soft and chewy), Fresh Fruit, Phirnee (quite tasty, it was my first time, R testified it was good), blueberry cheesecake (hacked to tiny little squares) and kiwi mousse (in tiny plastic mini-goblets). Dessert was nice and expansive, I appreciate that. 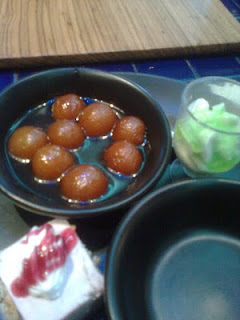 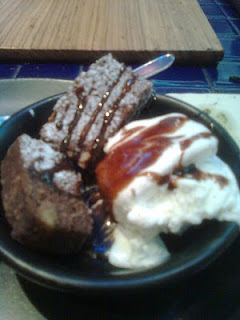 (The Walnut Brownie, with ice cream and fudge)
Barbeque Nation was a good experience, on the expensive side, but very good nevertheless. I'll give this one a 3-and-a-half-chicken legs. I suggest go there with a good bunch of famished friends for the birthday of one of them. That'll get true value for munny! :)
Happy Eating!